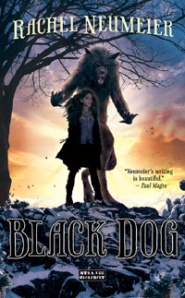 Black Dog by Rachel Neumier has been in my TBR mountain for quite a while already.  I tend to be picky about my urban fantasies and paranormal romances, because the trend towards vampires and shapeshifters in YA that was spawned by those Twilight books has produced a lot of sub-par and derivative writing. And honestly, there are only so many variations on a theme that can be done before everything literally starts to bleed together in most readers’ collective consciousnesses.

So what differentiates an excellent urban fantasy/paranormal from a derivative one? Two words. WORLD BUILDING. And I’m happy to say that Black Dog has it in spades. The titular black dogs in the book aren’t your run-of-the-mill moon-bound werewolves, something that Rachel Neumeier reveals bit by intriguing bit without resorting to the dreaded infodumping tactic.

And so we are presented with a world where ordinary folks like you and me have been living our lives blissfully unaware of the escalating supernatural war being waged around us. When the magic that has been clouding people’s perceptions breaks (and yes, the pun on the ever wonderful Ilona Andrews’ Magic Breaks is intentional because I can’t wait to get started on that book next), humanity is caught in the crossfire between warring factions who are unable to control the increasing numbers of rogue black dogs. Dimilioc in Vermont is the last bastion of power and hope to stem the rising tide of hysteria, murder and insanity that has gripped the population. Here, the Black Wolves (as they prefer to be called) of Dimilioc exercise iron control over their shadowy other halves and maintain an uneasy symbiotic relationship with the people of the nearby towns.

It is to Dimilioc that Natividad Toland, her twin brother Miguel, and her older brother Alejandro flee after both parents are murdered by their enemies. Natividad is a Pure, one who is able to wield magic for protection and call upon the Aplacando, which enables Black Dogs to better control their shadow selves. Dimilioc is sworn to protect the Pure, but elsewhere, they are hunted down because of the power they hold over Black Dogs.

This brings me to the next point that differentiates Black Dog from the rest. CHARACTER DEVELOPMENT. It’s tempting in urban fantasies/paranormals to simply let the fantastic elements overpower the characters themselves. Rachel Neumeier uses dialog to great effect here, by giving each character a very distinct voice. For example, Ezekiel Korte, Dimilioc’s young executioner is described this way:

He had drawn danger and disdain around himself as closely as that leather jacket, but what she thought was that she had never in her life seen anyone who seemed more alone.

Ezekiel’s dialog is peppered with lines like this one:

“I could tear out your throat right now,” Ezekiel said softly. “Could you stop me?”

So Ezekiel, as the resident cool guy/potential love interest (he did stake his “claim” on Natividad rather early in the story, whether Natividad agrees to this or not is still up for debate) manages to establish mastery over lesser/weaker characters with just a few well placed words and a confidence that belies his relative youth. Ezekiel is powerful, and his attitude shows that he knows it. But his dialog also shows that he is a lone wolf by nature, and that he doesn’t have the political savvy or air of command that Greyson Lanning, Master of Dimilioc, possesses.

Speaking of Greyson Lanning… My perspective must have changed as I’ve grown older. I used to be all for (still am, to an extent) cool, aloof loner types a la Ezekiel. Must be a direct result of the number of anime I watched in high school and college. But now I find myself scratching my head as to whether I should be Team Ezekiel or Team Greyson. And yes, it’s kind of squicky to think about Natividad X Greyson (him being just old enough to be her father and all), but these are Black Dogs we’re talking about, and human mores don’t apply to them. Greyson is strong, and often depicted as larger than life, but we clearly see that he is trying to do his best for Dimilioc. His decisions often lead him into direct collision courses with Natividad, who feels that her duty as a Pure is to help protect the townspeople, and with Alejandro, who feels that his first duty is to protect Natividad and Miguel.

And Miguel…  As the lone non-magical, purely human character in our main cast, it would be so easy for him to blend into the woodwork. But he doesn’t, because his dialog reveals him to be a strong personality in his own right, often using logic and reason to win over his siblings and the Dimilioc lobos to his side of an argument. Besides, anyone who delivers snarky dialog like this immediately gets my vote:

“It’s not my fault I got the pizza gene and you got the tamale gene. Can we order pizza if we put jalapenos on it?”

Tamales and jalapenos. So very Mexican. Which makes sense since our three siblings are part Mexican after all. The number of Spanish phrases interspersed throughout the book made me wish that Spanish was still used here in the Philippines so I wouldn’t need to hope that there would be a translation in the following sentence. I should also say that I dislike cultural appropriation in fiction, and that I dislike plugging in diverse characters/settings into a book just for the sake of making the book “different” even worse. Luckily, neither is present in Black Dog. The Toland siblings are very much Mexican in their upbringing, as evidenced by their strong sense of family ties; it’s quite plainly a part of who they are instead of appearing to be a cultural stereotype adopted by an author too lazy to do proper characterization in his/her work. Once it was established that their mother was Mexican, none of the Dimilioc wolves ever remarked on it again, or even attempted to exoticize (is that even a word?) the siblings in any manner.

Most summaries for this book depict Natividad as the main character, and she is to a degree, as all the major events in the book happen with her as the focus. The way Black Dog is set up though, it is as much Alejandro’s story as it is hers. Bearing in mind that although the seeds of possible romances are there (Natividad X Ezekiel, Natividad X Greyson, Alejandro X Kezia), this first book seems to be more about having these two characters growing into their powers and discovering themselves in the process. Which is a positive for me, as it strikes a good balance between being interesting enough to attract a male readership and having enough swoon factor to keep the female audiences happy. *coughmoreEzekielpleasecough* This book DESERVES a wider readership than the one it would get had it been mistakenly marketed as “yet another YA werewolf paranormal romance”.

Overall, Black Dog is a strong foray into urban fantasy for Rachel Neumeier, whose previous works are more in the epic fantasy scale. While the book concludes nicely enough, there are enough loose threads/questions left hanging in the air (Exactly how did the villain of this piece, Von Hausel, acquire his powers? What will happen when Natividad turns sixteen and has to choose a mate from among the surviving Dimilioc wolves? Will we ever get an origin story for how Black Dogs came to be? And hold on, did she just mention Chinese DRAGONS?) to keep me interested in a second installment. Plus, I want to see more action coming from the Miguel front, so hopefully the next book will deliver this.